Lugana: Try This Wine Before It Disappears

A small wine region in northern Italy might lose 25% of its vineyards to a planned railway expansion. The region is called Lugana and it’s located along the southern banks of Lake Garda very close to Verona. Lugana focuses on a white grape they call Turbiana (which is a bit of a mystery, I’ll explain below) for both sparkling and still wines.

So, now we’re all wondering: is Lugana worth saving? 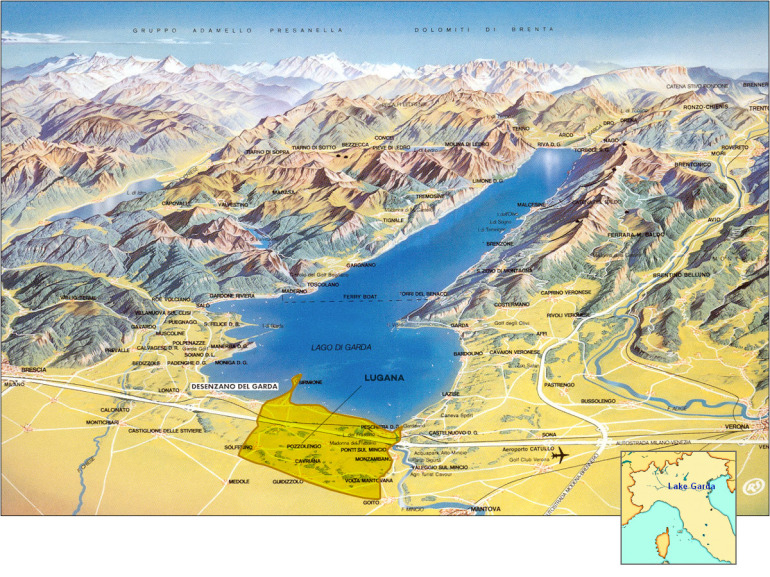 Lugana’s grape, Turbiana, is a bit of a mystery. For the longest time, it was thought to be a variant of Trebbiano (the Cognac grape) because it was called Trebbiano di Lugana. Then, a researcher discovered that it was indeed not Trebbiano. Then, DNA profiling in 2008 showed us that Turbiana is genetically very similar to Verdicchio, but the Consorzio di Lugana was not satisfied!

In March 2021, it was announced that Verdicchio and Turbiana are close relatives (closer to each other than other varieties) but they are genetically distinct vines. Three clones of Turbiana were selected and placed into Italy’s national register of vine varieties. So, it’s its own thing!

Profile of a Lugana Wine

While Turbiana is not on the verge of extinction, Turbiana is indeed unique. The high quality examples have notes of pineapple, mandarin orange with a round and lush style supported by the classic Italian ‘green almond’ flavor. The bitter almond note morphs into hazelnut-like flavors as the wine ages and oxidizes. There are also several Sparkling Lugana wines, which have a golden yellow hue and notes of apple, peach, lemon and pear.

The railway would remove nearly 750 acres of Turbiana.

In other regions, this would be a serious issue but not devastating. In the case of Lugana, since they are so small and located in between a lake and a completely different region (Lombardy), they don’t have any space to move. The vineyards would be lost forever.

The new tracks will cover an area just a quarter of a mile away from the original tracks to accommodate a high-speed connection that was originally planned to run from Kiev to Lisbon when it was drafted in 1992. The project is truly impressive, having been created just 4 years after the Berlin Wall fell, but recently several countries, including Portugal, Spain and France, have backed out.

750 acres in exchange for 4 minutes of convenience.

The Consorzio of Lugana made an effort. They crunched the numbers and figured out that if the new train worked with the original rail line that the time cost might only be 4 minutes more. They created a petition and appealed to the president and now we wait to see what they decide.