Some Nifty Science to Help You Identify Wine Aromas

Let’s understand wine aromas through the science behind them. As it turns out, those little whiffs of fruit, flowers, and “minerality” help us deconstruct a wine.

Behind those countless flavors we sniff is a molecule. It enters your nose, impacts your olfactory receptors, and generates a signal to your brain which tells us things like, “I’m smelling strawberry!”

These molecules are tiny clusters of carbon atoms generated during grape ripening, alcoholic and malolactic fermentation, and wine aging. We can split aromas into 3 types:

By the way, enologist and researcher Dr. Luigi Moio gives an exciting and clear explanation of the origin of the wine aromas in his book “The Breath of Wine” (Il respiro del vino). I’ve referenced it for this article. 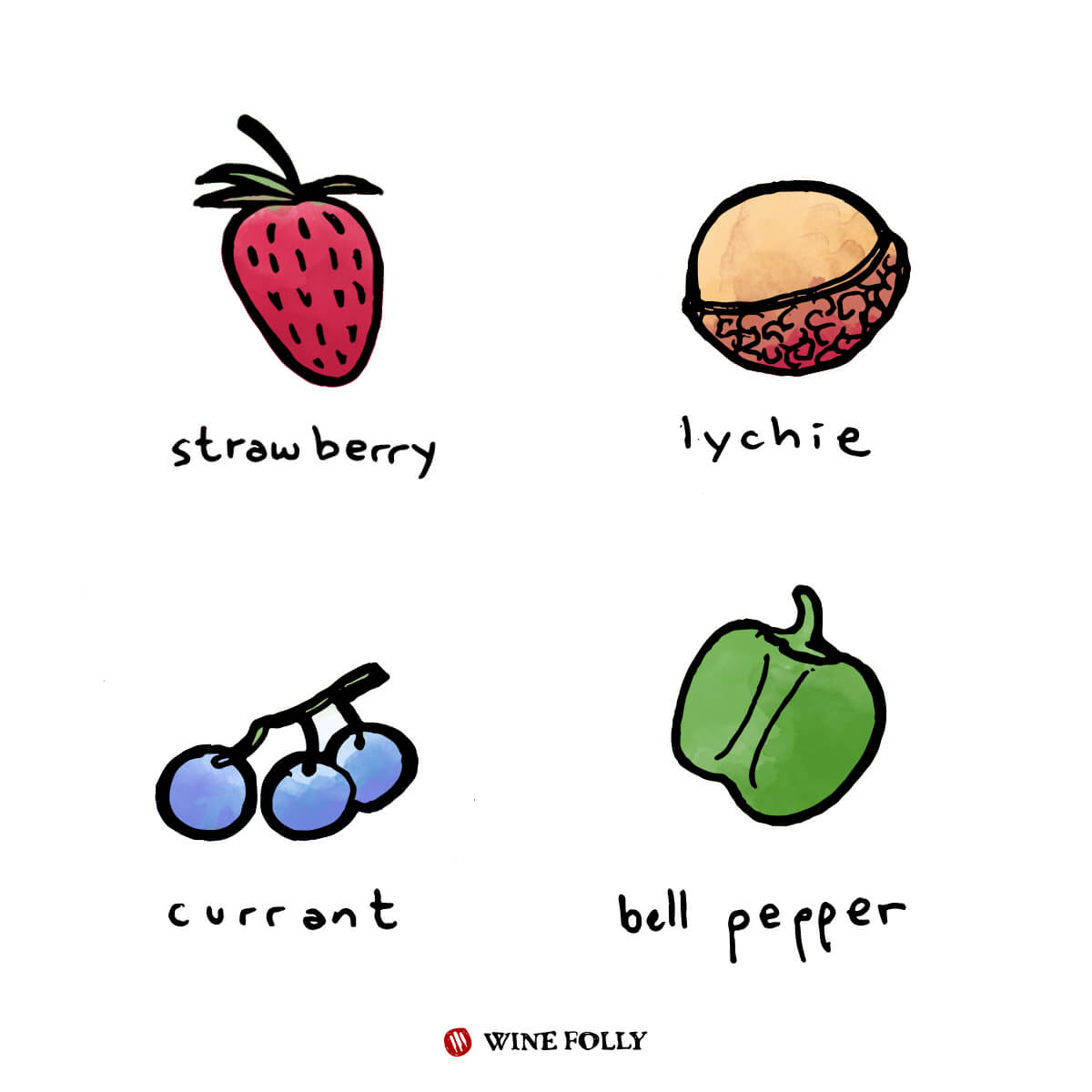 Varietal aromas happen through vine metabolism as grapes mature. We believe they’re created as a survival technique: to make the grapes more attractive for animals to eat and spread seeds around.

For example, the ancient wine variety Moscato Bianco is very high in a compound group called monoterpenes. Because of this, ripe grapes smell extra sweet and floral around harvest.

You can’t perceive certain primary aromas. This is because they’re bonded to other bigger compounds that prevent them from volatilizing (and floating into our noses).

If you think this is bad, think twice! If all aromas were immediately perceivable the wine would have a very intense aroma for a very short time. Fortunately, hidden aromas release slowly over time. Dr. Moio believes this gives wines longevity and is the secret why Alsatian wines become more aromatic as they age!

Sommeliers refer to some fermentation aromas as “secondary aromas.”

During alcoholic fermentation, the yeast called Saccharomyces cerevisiae transforms grape sugar into carbon dioxide and ethyl alcohol. But It does much more than just that!

A yeast cell is a tiny chemical lab producing a large variety of molecules including esters. Esters are particularly strong right after the fermentation and can smell vinous and like apple, tropical fruit, or even red berries. (try Beaujolais Nouveau for a study on esters!)

Also, the tiny bacteria that performs malolactic fermentation (which softens acids in wine) puts out buttery, toasting, spicy, and even nutty aromas.

Wine aging in tanks, barrels, or bottles causes its own bouquets. There are three mechanisms that make these bouquets: chemical reactions, oxidation, and wood flavors.

Molecules form when chemicals within the wine react with one another to form new ones. For example, alcohols and acids interact to create esters. These chemical reactions happen when the wine is in tank or bottle and protected from oxygen.

When wines age in terracotta tanks or wood they experience micro-oxidation which can produce compounds like acetic aldehydes (acetaldehyde).

For example, wines like Sherry or Madeira, age directly exposed to oxygen and produce flavors like dried fruits, nuts, and caramelized sugar.

Wood releases aromatic compounds into the wine. Of course, each species of oak or chestnut used in winemaking imparts different flavors. Also, the geographical origin of the wood and barrel toasting (thermal treatment) also affects flavors. 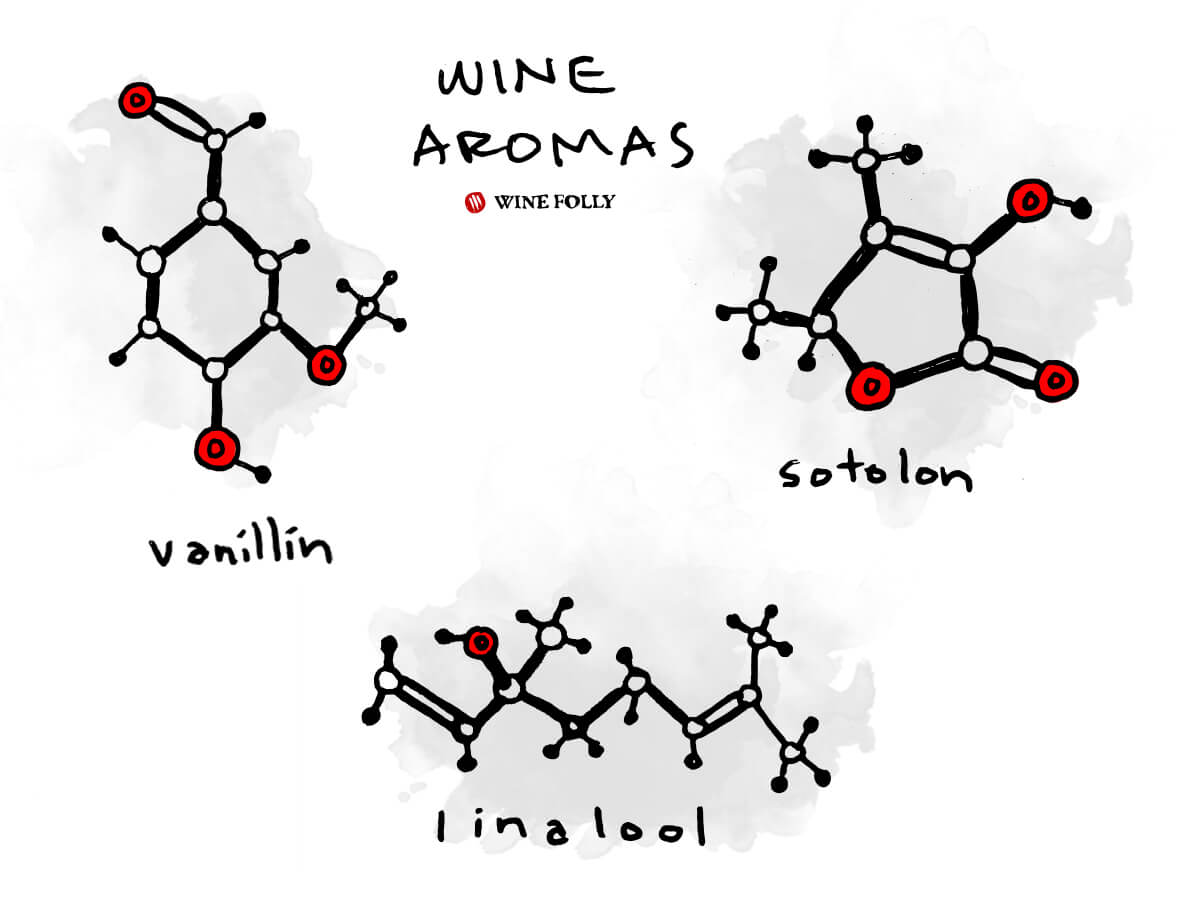 There’s a dizzying array of flavors found in wine even though it’s only old grapes. Of course, now we know how the combination of grape, fermentation, and aging unlock countless flavors.

After reading a few of the often-unpronounceable chemical names of wine aroma molecules, it’s understandable why sommeliers prefer to stick to a library of fragrances that we can all relate to!

Born in Asti, Piedmont, Italy, I began working in the wine industry in 2001 and I have recently completed Doctoral studies in Chemistry at the Hebrew University of Jerusalem. In 2015 I started an experimental project of production of "traditional method" sparkling wines in Israel from unconventional grape varieties.