A Primer to Chinese Wine (Regional Guide with Maps)

We can’t ignore the incredible growth of Chinese wine over the last few years. The country already outpaces many classic wine regions (in terms of production), coming in at 9th place in the world (2018).

Everything moves quickly in China, and so does the wine industry.

It’s time to take a closer look at Chinese wine to learn the wine varieties, the regions, and the unique terroir.

Xinjiang and China in general are currently under scrutiny from human rights groups for crimes against humanity for their treatment of the Uyghur population. We absolutely do not condone these actions, however we feel that it’s still important to know China’s wine regions and winemakers. For more information on the Chinese government and the plight of the Uyghur people, click here.

All About Chinese Wine

Wine culture is relatively new in China but in a short period of time it grew to be the 5th largest wine consumer in the world.

What’s more intriguing is the development of China’s own wine industry. The Eurasian grapevine first came to China during the Han Dynasty, around 2,200 years ago. Yet, it’s only been since the 1980s that we’ve seen China devote itself to modern winemaking. 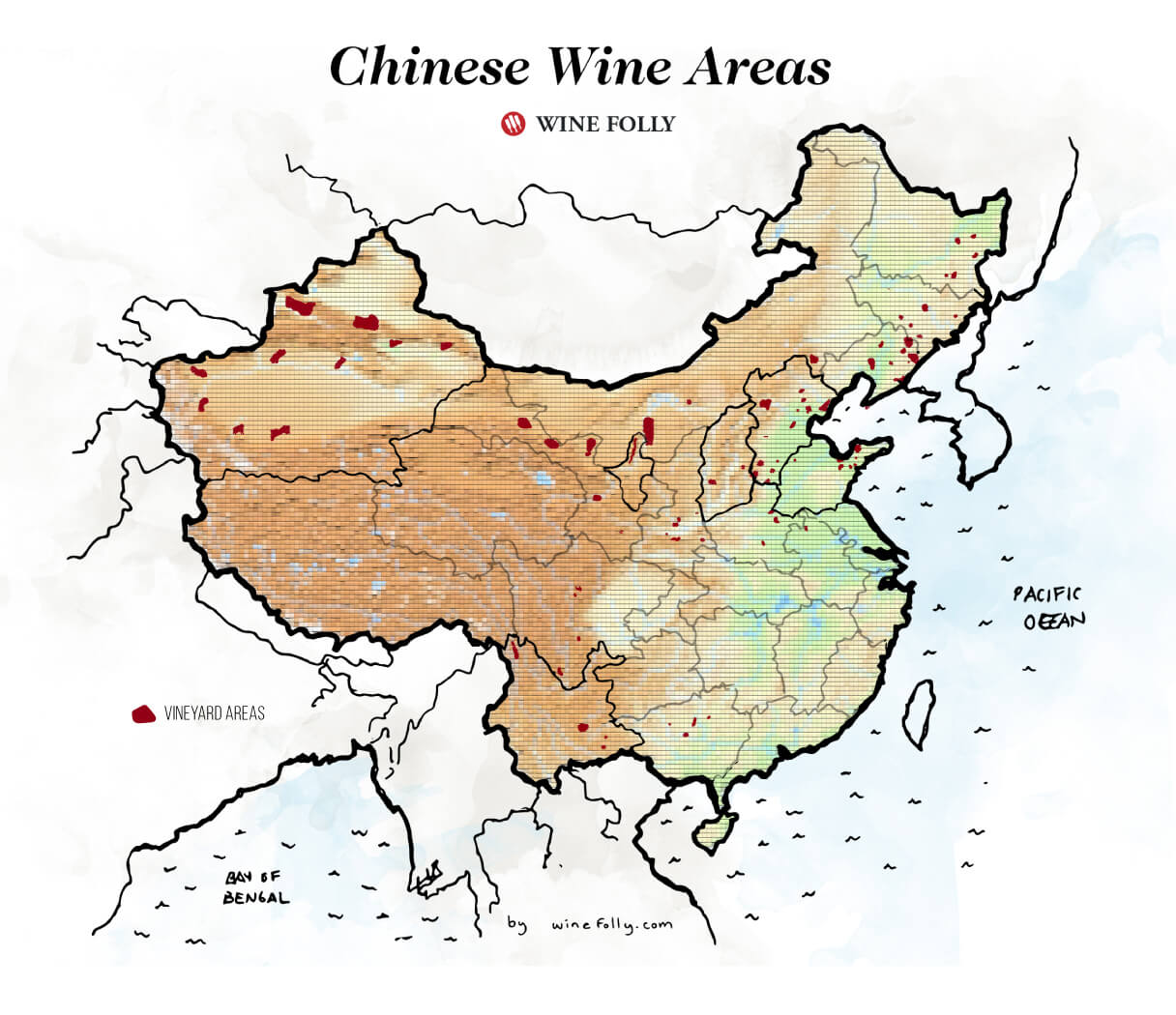 China is a vast region, with various winemaking terrains and climates.

In China, Cabernet is KING.

Cabernet Gernischt arrived in China during the 19th century. The name loosely translates from German to “mixed Cabernet.” The noted grape geneticist, José Vouillamoz, researched it and figured out that Cabernet Gernischt is, in fact, Carménère!

The grape is often blended with Cabernet Sauvignon. Perhaps this explains why domestic Chinese wines often have a bell pepper (pyrazine) flavor – a common trait of the Cabernet family, particularly Carménère.

Another oddity in Chinese wine production is Marselan, a red grape originally from Southern France. First bred in 1961 by Professor Paul Truel, it’s a cross between Cabernet Sauvignon and Grenache. Marselan demonstrates good resistance to powdery mildew. Thus, it performs well in humid regions (such as Shandong). These wines are medium-bodied and Cabernet-like.

Unlike other wine regions, government support and influence plays a key role in the winemaking of China.

Big brands like Great Wall and Changyu flood the market. These wines win at distribution, filling shelves across China’s immense country. They provide affordable wine, but, regrettably, do not paint a positive image of China’s winemaking potential.

Fortunately, we’ve seen smaller producers start to emerge; most notably from Ningxia, Xinjiang, and Yunnan. These wineries craft terroir-driven wines and lead the way with experimentation. 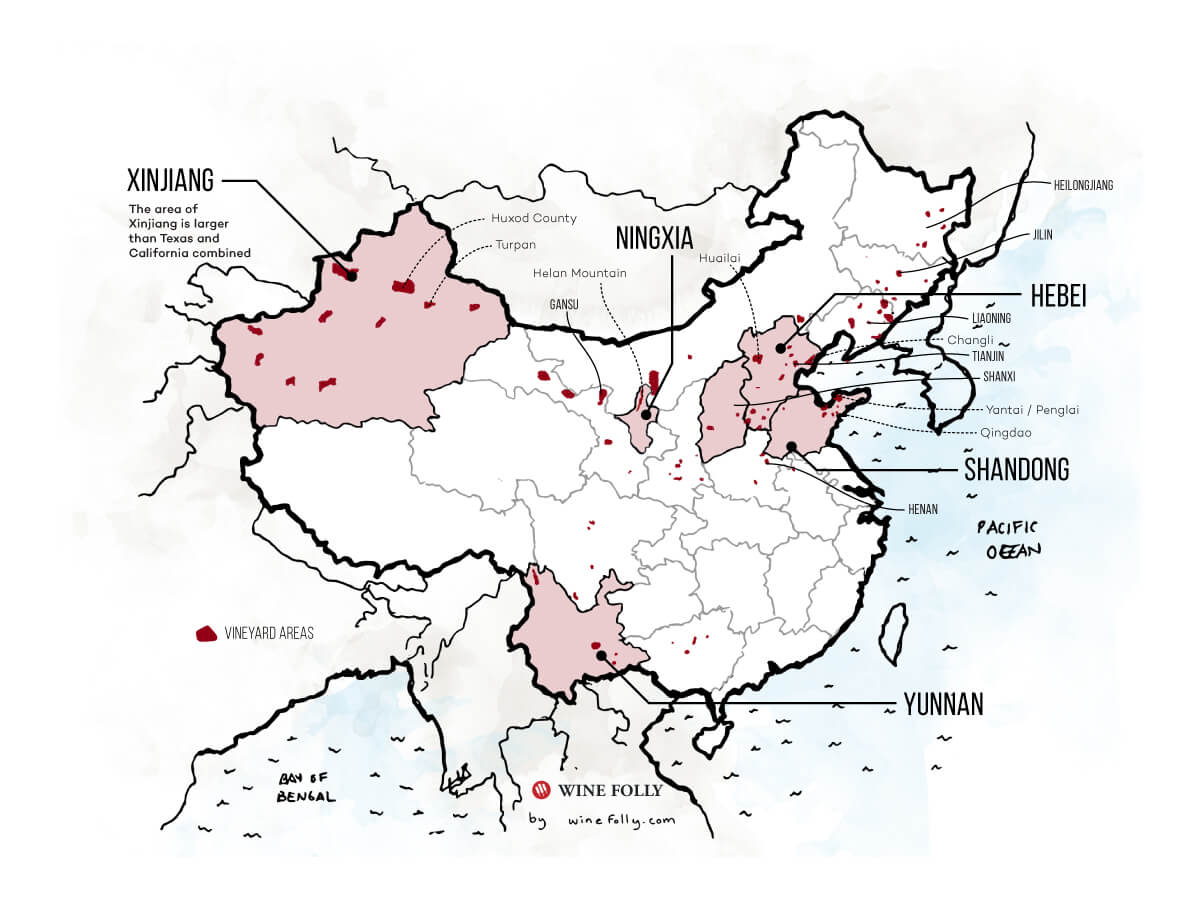 There are 12 major wine regions in China, with five regions known for both quality and production.

Shandong has been China’s largest wine region, producing over 40% of the country’s wine. This is where China’s first modern winery, Changyu, started in 1982.

Yantai and Penglai sit along the same latitude as Bordeaux, so it is easy to point out the similarities between the two wine growing regions. Within Yantai, several large wineries mimic the same style of architecture as Bordeaux, with lavish French-inspired châteaux.

The climate in Shandong is distinctly maritime. Its proximity to the sea, with monsoons and high annual rainfall, makes for wine growing challenges and difficulties. There exists high disease pressure during the growing season (not unlike Bordeaux). And, it’s here that you’ll find plantings dedicated to Cabernet Gernisht, Merlot, and Cabernet Sauvignon.

Ningxia is home to the most critically acclaimed wines in China. The region specializes in Bordeaux varieties, including Cabernet Sauvignon, Merlot, and Cabernet Gernischt (Carménère). It became famous after a hyped “Bordeaux vs. Ningxia” blind-tasting competition gave the region four of the top five wine placements.

The region is home to about 93,900 acres of vineyards (38,000 hectares), making it the second largest wine region in China. Most of the ~200 wineries found here work vineyards on the low foothills of Helan Mountain.

What’s unique about Ningxia is its relative isolation and climate extremes. The region sits on the eastern edge of the Gobi Desert, where workers bury vineyards each year to survive the winter.

Additionally, Ningxia is situated at an extremely high elevation (for wine growing), with vineyards at 4,000 feet (1,200 meters). This increases solar radiation and grapes produce more anthocyanin (the red color in wine).

Surrounding China’s capital city of Beijing is Hebei. Hebei is the 3rd largest wine producing region in China, with 32,130 acres (13,000 hectares) of vines. It is home to one of the largest domestic producers: Great Wall. In fact, wine is the main industry in Hebei, with a market of 10 billion Yuan (USD $1.4 billion).

Hebei has various terroirs, from floodplains to mountain ranges, but there are two distinct winemaking regions: Huailai and Changli.

Huailai is situated northwest of Beijing, in the hills. The best vineyards are at higher altitudes, up to 3,200 ft (1,000 meters), where a dry climate prevails throughout the wine growing season. With vineyards only two hours from China’s capital (and 21.5 million people), Hauilai is a local tourist destination.

Changli is situated near the Bohai Sea, where high humidity and disease pressure go hand in hand. Winter is cold and dry with freezing winds from Siberia. Because it’s so cold, vines get buried by hand to survive the winter.

Xinjiang is a bit of a quandary. Supposedly, it produces as much as 100,000 tons of grapes on just 16,000 acres (6,470 hectares) each year. This remote region in northwest China shares borders with Kazakhastan, Tajikstan, and Afghanistan. The region has very rugged conditions with low rainfall and high temperature shifts between day and night. Because of this, grapes produced here tend to have high sugar content and low acidity, making for sweet and somewhat flat wines.

Additionally, transport is very difficult into and out of the region. So, most wines are shipped in bulk to large wine companies for blending. Against all odds, the region still shows potential because of its agricultural history with raisin production.

Within this area, there are two regions with geographic indications of interest: Turpan and Hoxud. Wines planted here include Cabernet Sauvignon, Cabernet Franc, and Chardonnay.

This is Himalayan terroir, as Yunnan straddles Laos and Myanmar. Normally an area along the tropics would seem like a very unlikely place to make quality wine. But, with the high altitude of the Shangri-La Mountain range being around 8,530 feet (2,600 meters), it’s possible to grow quality wine grapes here.

Considering that, Moët Hennessy recently invested in the region, planting 500 acres (Cabernet varieties), intended to be managed by more than 120 Tibetan farmers.

The growth of the Chinese wine industry suggests that there is keen interest for local wine communities around the world. China’s reliance on French wine as the benchmark of production continues to support the classic model of wine in the world. But, is this what’s best for Chinese tasting standards? Traditional Chinese cuisine begs for zesty white wines and rosé. And yet, dry, full-bodied red wines are the most important category in the wine growing industry here.

Regardless, the devotion China has demonstrated to producing both great quantity and quality wine is truly remarkable. The rest of the world can also learn from how the Chinese tackle their unique agricultural challenges.

Emilie Steckenborn has lived in Shanghai, China for over seven years and is currently the Head of Education for Asia & MEIA at Treasury Wine Estates. Her passion for wine, food, beer and cocktails are brought to life through Bottled in China podcast and blog.